Do you get snow in the Winter or do you live in a warm climate that rarely sees snow? We might see a little snow every 5 years or so where I live so it’s pretty exciting when it does snows. Even if you live in a warm weather climate you can still enjoy creating a little snowman this Winter. My kids and grandkids love making these Ice Cream Snowman treats almost as much as eating them. Here’s what you need to make an ice cream snowman: Since I knew it would take the kids a while to put their snowman together I pre-made scoops of ice cream, placed the individual scoops in muffin tins, and placed them back in the freezer for about an hour. I’ve also done this for birthday parties. You can place the individual ice cream scoops in cupcake liners or treat cups. It beats trying to scoop ice cream during the party. Place a little coconut, chocolate shavings, nuts, or candy sprinkles on the bottom of a shallow bowl or plate to keep the ice cream scoops from sliding around. I chose coconut to represent snow but the kids already told me they would prefer candy sprinkles next time. Go figure! I made a couple snowmen to show the kids and then they got busy making their own. Place one scoop of ice cream on top of the other and then let the kids create. Separate 2 pieces of the rope licorice for the scarf and place around the area where the two ice cream scoops meet. The eye are mini chocolate chips and the nose is the orange part of the candy corn. I cut some candy corn pieces into triangles for the kids. The nerds make the smile or in this case a somewhat frown. Make the hat with half an Oreo cookie and a Rolo. Use the Oreo icing to stick the Rolo to the top. The kids had so much fun making their snowmen and were so proud of their creations. They did such a great job! I asked the adults if they wanted to make a snowman but they chose to just eat the ice cream. Do you want to build a snowman? The kids really had a great time. Since I’m not an artist I made them really simple which was perfect for the kids. Feel free to add more detail and get as elaborate as you like. I think they turned out so adorable, don’t you? 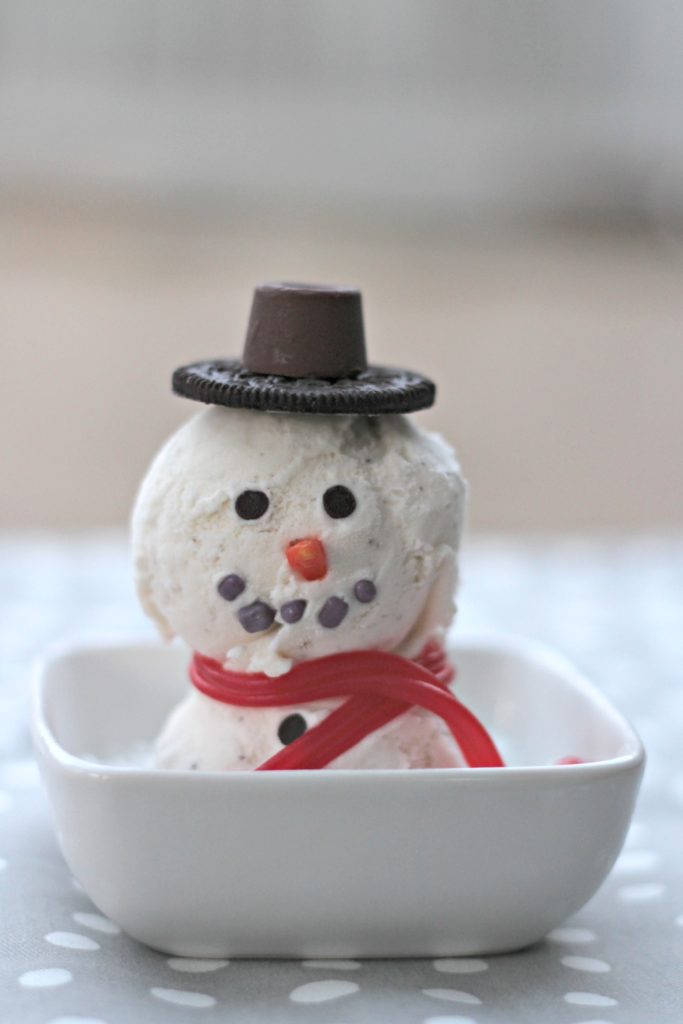